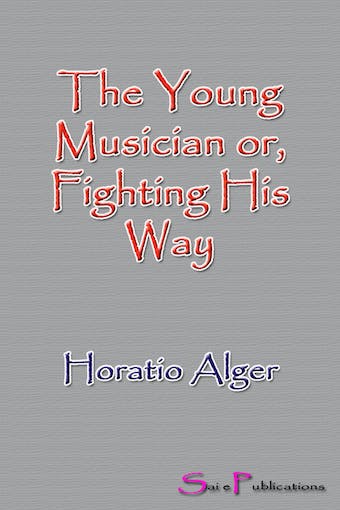 The Young Musician or, Fighting His Way

The Young Musician or, Fighting His Way

"As for the boy," said Squire Pope, with his usual autocratic air, "I shall place him in the poorhouse."

"But, Benjamin," said gentle Mrs. Pope, who had a kindly and sympathetic heart, "isn't that a little hard?"

"Hard, Almira?" said the squire, arching his eyebrows. "I fail to comprehend your meaning."

"You know Philip has been tenderly reared, and has always had a comfortable home—"

"He will have a comfortable home now, Mrs. Pope. Probably you are not aware that it cost the town two thousand dollars last year to maintain the almshouse. I can show you the item in the town report."

"I don't doubt it at all, husband," said Mrs. Pope gently. "Of course you know all about it, being a public man."

Squire Pope smiled complacently. It pleased him to be spoken of as a public man.

"Ahem! Well, yes, I believe I have no inconsiderable influence in town affairs," he responded. "I am on the board of selectmen, and am chairman of the overseers of the poor, and in that capacity I shall convey Philip Gray to the comfortable and well-ordered institution which the town has set apart for the relief of paupers."

"I don't like to think of Philip as a pauper," said Mrs. Pope, in a deprecating tone.

"What else is he?" urged her husband. "His father hasn't left a cent. He never was a good manager."

"Won't the furniture sell for something, Benjamin?"

"It will sell for about enough to pay the funeral expenses and outstanding debts-that is all."

"But it seems so hard for a boy well brought up to go to the poorhouse."

"You mean well, Almira, but you let your feelings run away with you. You may depend upon it, it is the best thing for the boy. But

I must write a letter in time for the mail."

Squire Pope rose from the breakfast-table and walked out of the room with his usual air of importance. Not even in the privacy of the domestic circle did he forget his social and official importance.

Who was Squire Pope?

We already know that he held two important offices in the town of Norton. He was a portly man, and especially cultivated dignity of deportment. Being in easy circumstances, and even rich for the resident of a village, he was naturally looked up to and credited with a worldly sagacity far beyond what he actually possessed.

At any rate, he may be considered the magnate of Norton. Occasionally he visited New York, and had been very much annoyed to find that his rural importance did not avail him there, and that he was treated with no sort of deference by those whom he had occasion to meet. Somehow, the citizens of the commercial metropolis never suspected for a single moment that he was a great man.

When Squire Pope had finished his letter, he took his hat, and with measured dignity, walked to the village post-office.

He met several of his neighbors there, and greeted them with affable condescension. He was polite to those of all rank, as that was essential to his retaining the town offices, which he would have been unwilling to resign.

From the post-office the squire, as he remembered the conversation which had taken place at the breakfast-table, went to make an official call on the boy whose fate he had so summarily decided.