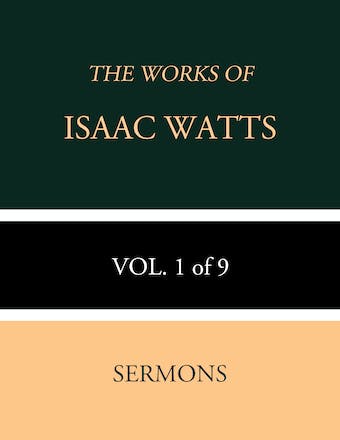 The Works of Isaac Watts

The Works of Isaac Watts

IT was a custom among the ancient Romans, to preserve in wax, the figures of those among their ancestors, who were of noble birth; or had been more nobly advanced to the chair of honour by their personal merits. Sallust relates “that Scipio and other great then, by beholding these likenesses, found enkindled in their breasts, so ardent a thirst after virtue, as could not be extinguished, till, by the glory of their own actions, they had equalled the illustrious objects of their emulation. But it is the happiness of Christians to possess truer notions of virtue, and to be governed by infinitely higher views. We may, however, hence observe the force of example, which is peculiarly operative in those who sincerely love God. They no sooner reflect on the accounts given of such as have been eminent for their piety and zeal, than they become desirous of imbibing the same spirit.

The advantages to be derived from theological biography, are too various to be enumerated; and of such obvious importance, as to supersede all studied encomiums. The sacred scriptures abound with relations of extraordinary occurrences in the lives of men, who were distinguished in their day by their virtues or their crimes: And, as if the Holy Spirit designed to provide for our entertainment, and to gratify our curiosity; there is not a beauty in this species of historical writing, of which we have not some interesting example, in the inspired volume.

Each character is drawn by the hand of impartiality and faithfulness; so that we are in no danger of being deceived by the influence of any of those passions, which so often degrade other relations of the same kind. While compassion tempers the hatred of sin, the love of truth corrects the ardor of private gratitude, the usual partiality of friendship, and the zeal of opinion. Here no excellence, which evidences them to be the Sons of God, is exalted above its intrinsic value; nor is any failing, common to them as the children of Adam, concealed or extenuated.