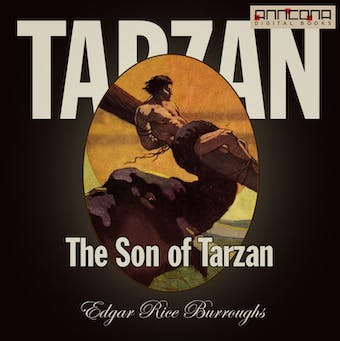 The Son of Tarzan

The Son of Tarzan

4,5 2 betyg
Serien The Tarzan series Del 4
9 h 45 min
The Son of Tarzan is a novel written by Edgar Rice Burroughs, the fourth in his series of books about the title character Tarzan. It was first published in the magazine All-Story Weekly as a six-part serial from December 4, 1915-January 8, 1916. It was published in book form in March, 1917.

Alexis Paulvitch, a henchman of Tarzan's now-deceased enemy, Nikolas Rokoff, survived his encounter with the ape-man in The Beasts of Tarzan and wants to even the score. He lures Jack, Tarzan's son, away from London and into his clutches, but the youngster escapes with the help of the ape named Akut. The pair then flees into the deep African jungle where two decades earlier Tarzan himself had been raised. Jack Clayton, now on his own, becomes known as Korak the Killer and builds a reputation for himself in the jungle...

Tarzan is a fictional character, an archetypal feral child raised in the African jungles by the Mangani "great apes"; he later experiences civilization only to largely reject it and return to the wild as a heroic adventurer. Created by Edgar Rice Burroughs, Tarzan first appeared in the novel Tarzan of the Apes (magazine publication 1912, book publication 1914), and then in twenty-five sequels, three authorized books by other authors, and innumerable works in other media, authorized and not.

Tarzan is the son of a British lord and lady who were marooned on the Atlantic coast of Africa by mutineers. When Tarzan was only an infant, his mother died of natural causes and his father was killed by Kerchak, leader of the ape tribe by whom Tarzan was adopted. Tarzan is his ape name; his real English name is John Clayton, Earl Greystoke.

Tarzan has been called one of the best-known literary characters in the world. In addition to more than two dozen books by Burroughs and a handful more by authors with the blessing of Burroughs' estate, the character has appeared in films, radio, television, comic strips, and comic books.

Edgar Rice Burroughs (1875-1950) was an American author, best known for his creation of the jungle hero Tarzan and the heroic Mars adventurer John Carter, although he produced works in many genres.

Böcker i serien The Tarzan series