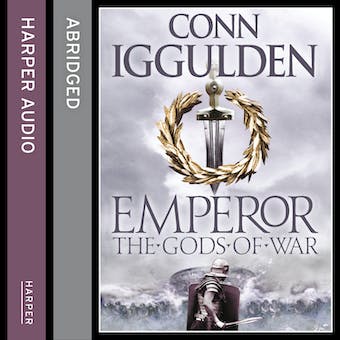 The Gods of War (Emperor)

The Gods of War (Emperor)

4,4 15 betyg
Serien Emperor Del 4
6 h 9 min
The fourth volume in the acclaimed Emperor series, in which Conn Iggulden brilliantly interweaves history and adventure to recreate the astonishing life of Julius Caesar – an epic tale of ambition and rivalry, bravery and betrayal, from an outstanding new voice in historical fiction.

It looked as if it would be war. The strife between that great figure, Pompey, the Dictator of Rome, and the young general fresh from his triumphant conquests of Gaul and Britain, had come to a head. So Julius Caesar, with all his generals and his four veteran legions, had crossed the Rubicon and was marching towards Rome.

But in the wide-reaching Roman Empire there are many more legions, and many loyal to Pompey, and to fight against and kill your own people will never be easy. So even when Julius Caesar, accompanied by Brutus, Mark Antony and Octavian, rode into Rome, the first time they had been back in their home town for over ten years, his path to success would not be easy. His uncanny ability at picking the right notes in his speeches from the Senate steps and his brilliance at communication made him sure of his role, sure of his rightfulness for command, sure that power was his alone.

But the power he could achieve in Rome itself was not repeated across the empire – and in Spain, in Africa, in Greece, in all Asia Minor, there were officials, commanders, legions loyal to Pompey and the Roman state. And would the friends who had fought at his side for so long continue to do so, to follow his star? How could Caesar succeed against such odds?

The Gods of War is the story of ambition and loyalty, of friendship and power, of love and war. A famous tale, of truly epic dimensions, it ranges from Rome to Greece to Egypt and back to Rome; it shows how brilliant generalship can completely turn the odds, how overwhelming success can change even the best of men; it depicts brilliantly those famous names – Caesar, Marcus Brutus, Mark Antony, Pompey, Cicero, Cleopatra, Ptolemy – so that they appear anew. This is a triumphant conclusion to the outstanding Emperor series.