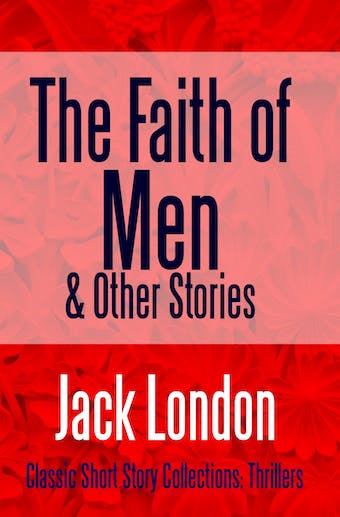 The Faith of Men & Other Stories

The Faith of Men & Other Stories

"The Faith of Men" is a short story collection originally published in 1904 and contains eight of Jack London's adventure tales, all of them set in London's favorite milieu -- the Yukon Territory. "A Relic of the Pliocene" concerns a "homely, blue-eyed, freckle-faced" hunter named Thomas Stevens and his tracking and eventual killing of a prehistoric mammoth. "A Hyperborean Brew" also concerns Thomas Stevens and his schemes. "In Batard," an evil master makes a monster of an evil dog. Other stories included are "The Faith of Men," "Too Much Gold," "The One Thousand Dozen," "The Marriage of Lit-Lit," "Batard," and "The Story of Jees Uck." .

"That suits me," said the second man,
turning, as he spoke, to the Indian that was mending snow-shoes in a

corner of the cabin. "Here, you Billebedam, take a run down to
Oleson's cabin like a good fellow, and tell him we want to borrow his

This sudden request in the midst of a council on
wages of men, wood, and grub surprised Billebedam. Besides, it was

early in the day, and he had never known white men of the calibre of
Pentfield and Hutchinson to dice and play till the day's work was

done. But his face was impassive as a Yukon Indian's should be, as he
pulled on his mittens and went out the door.

Though eight o'clock, it was still dark outside,
and the cabin was lighted by a tallow candle thrust into an empty

whisky bottle. It stood on the pine-board table in the middle of a
disarray of dirty tin dishes. Tallow from innumerable candles had

dripped down the long neck of the bottle and hardened into a
miniature glacier. The small room, which composed the entire cabin,

was as badly littered as the table; while at one end, against the
wall, were two bunks, one above the other, with the blankets turned

down just as the two men had crawled out in the morning.

Lawrence Pentfield and Corry Hutchinson were
millionaires, though they did not look it. There seemed nothing
unusual about them, while they would have passed muster as fair
specimens of lumbermen in any Michigan camp. But outside, in the

darkness, where holes yawned in the ground, were many men engaged in
windlassing muck and gravel and gold from the bottoms of the holes

where other men received fifteen dollars per day for scraping it from
off the bedrock. Each day thousands of dollars' worth of gold were

scraped from bedrock and windlassed to the surface, and it all
belonged to Pentfield and Hutchinson, who took their rank among the

table and drumming a tattoo on the cleared space with his knuckles.
Hutchinson snuffed the smoky candle and reflectively rubbed the soot

from the wick between thumb and forefinger.

"By Jove, I wish we could both go out!"
he abruptly exclaimed. "That would settle it all."

Pentfield looked at him darkly...

About Jack London:
Jack London (1876-1916), was an American author and a pioneer in the then-burgeoning world of commercial magazine fiction. He was one of the first Americans to make a lucrative career exclusively from writing. London was self-educated. He taught himself in the public library, mainly just by reading books. In 1898, he began struggling seriously to break into print, a struggle memorably described in his novel, Martin Eden (1909). Jack London was fortunate in the timing of his writing career. He started just as new printing technologies enabled lower-cost production of magazines. This resulted in a boom in popular magazines aimed at a wide public, and a strong market for short fiction. In 1900, he made $2,500 in writing, the equivalent of about $75,000 today. His career was well under way. Among his famous works are: Children of the Frost (1902), The Call of the Wild (1903), The Sea Wolf (1904), The Game (1905), White Fang (1906), The Road (1907), Before Adam (1907), Adventure (1911), and The Scarlet Plague (1912).

The Faith of Men & Other Stories är tillgänglig som e-bok.