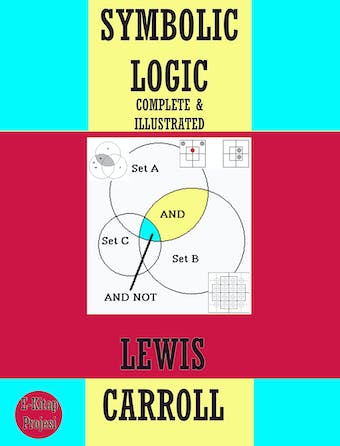 I shall be grateful to any Reader of this book who will point out any mistakes or misprints he may happen to notice in it, or any passage which he thinks is not clearly expressed.

I have a quantity of MS. in hand for Parts II and III, and hope to be able——should life, and health, and opportunity, be granted to me, to publish them in the course of the next few years. Their contents will be as follows:—

PART II. ADVANCED.
Further investigations in the subjects of Part I. Propositions of other forms (such as “Not-all x are y”). Triliteral and Multiliteral Propositions (such as “All abc are de”). Hypotheticals. Dilemmas. &c. &c.

Part III. TRANSCENDENTAL.
Analysis of a Proposition into its Elements. Numerical and Geometrical Problems. The Theory of Inference. The Construction of Problems. And many other Curiosa Logica.

TO LEARNERS.
[N.B. Some remarks, addressed to Teachers, will be found in the Appendix]

The Learner, who wishes to try the question fairly, whether this little book does, or does not, supply the materials for a most interesting mental recreation, is earnestly advised to adopt the following Rules:—

(1) Begin at the beginning, and do not allow yourself to gratify a mere idle curiosity by dipping into the book, here and there. This would very likely lead to your throwing it aside, with the remark “This is much too hard for me!”, and thus losing the chance of adding a very large item to your stock of mental delights. This Rule (of not dipping) is very desirable with other kinds of books——such as novels, for instance, where you may easily spoil much of the enjoyment you would otherwise get from the story, by dipping into it further on, so that what the author meant to be a pleasant surprise comes to you as a matter of course. Some people, I know, make a practice of looking into Vol. III first, just to see how the story ends: and perhaps it is as well just to know that all ends happily——that the much-persecuted lovers do marry after all, that he is proved to be quite innocent of the murder, that the wicked cousin is completely foiled in his plot and gets the punishment he deserves, and that the rich uncle in India (Qu. Why in India? Ans. Because, somehow, uncles never can get rich anywhere else) dies at exactly the right moment——before taking the trouble to read Vol. I. This, I say, is just permissible with a novel, where Vol. III has a meaning, even for those who have not read the earlier part of the story; but, with a scientific book, it is sheer insanity: you will find the latter part hopelessly unintelligible, if you read it before reaching it in regular course.

(2) Don’t begin any fresh Chapter, or Section, until you are certain that you thoroughly understand the whole book up to that point, and that you have worked, correctly, most if not all of the examples which have been set. So long as you are conscious that all the land you have passed through is absolutely conquered, and that you are leaving no unsolved difficulties behind you, which will be sure to turn up again later on, your triumphal progress will be easy and delightful. Otherwise, you will find your state of puzzlement get worse and worse as you proceed, till you give up the whole thing in utter disgust.

(3) When you come to any passage you don’t understand, read it again: if you still don’t understand it, read it again: if you fail, even after three readings, very likely your brain is getting a little tired. In that case, put the book away, and take to other occupations, and next day, when you come to it fresh, you will very likely find that it is quite easy.

(4) If possible, find some genial friend, who will read the book along with you, and will talk over the difficulties with you. Talking is a wonderful smoother-over of difficulties. When I come upon anything——in Logic or in any other hard subject——that entirely puzzles me, I find it a capital plan to talk it over, aloud.