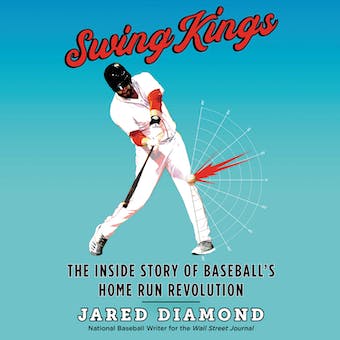 Swing Kings: The Inside Story of Baseball's Home Run Revolution

Swing Kings: The Inside Story of Baseball's Home Run Revolution

10 h 10 min
"This is the best baseball book I’ve read in years. Swing Kings is a love letter to small people with big ideas." — Sam Walker, author of The Captain Class

From the Wall Street Journal’s national baseball writer, the captivating story of the home run boom, following a group of players who rose from obscurity to stardom and the rogue swing coaches who helped them usher the game into a new age.

We are in a historic era for the home run. The 2019 season saw the most homers ever, obliterating a record set just two years before. It is a shift that has transformed the way the game is played, contributing to more strikeouts, longer games, and what feels like the logical conclusion of the analytics era. In Swing Kings, Wall Street Journal national baseball writer Jared Diamond reveals that the secret behind this unprecedented shift isn’t steroids or the stitching of the baseballs, it’s the most elemental explanation of all: the swing. In this lively narrative romp, he tracks a group of baseball’s biggest stars—including Aaron Judge, J.D. Martinez, and Justin Turner—who remade their swings under the tutelage of a band of renegade coaches, and remade the game in the process.

These coaches, many of them baseball washouts who have reinvented themselves as swing gurus, for years were one of the game’s best-kept secrets. Among their ranks are a swimming pool contractor, the owner of a billiards hall, and an ex-hippie whose swing insights draw from surfing and the technique of Japanese samurai. Now, as Diamond artfully charts, this motley cast has moved from the baseball margins to its center of power. They are changing the way hitting is taught to players of all ages, and major league clubs are scrambling for their services, hiring them in record numbers as coaches and consultants. And Diamond himself, whose baseball career ended in high school, enlists the tutelage of each swing coach he profiles, with an aim toward starring in the annual Boston-New York media game at Yankee Stadium.

Swing Kings is both a rollicking history of baseball’s recent past and a deeply reported, character-driven account of a battle between opponents as old as time: old and new, change and stasis, the establishment and those who break from it. Jared Diamond has written a masterful chronicle of America’s pastime at the crossroads.