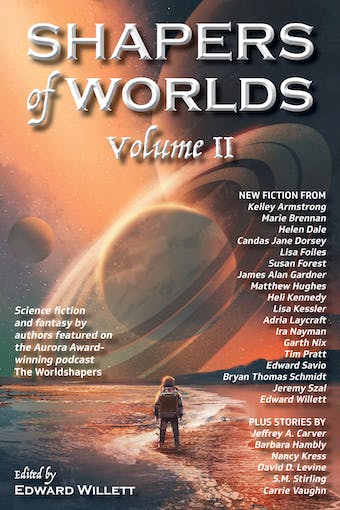 Serien Shapers of Worlds Del 2
Explore twenty-four imaginative tales crafted by some of today’s best writers of science fiction and fantasy, all guests on the Aurora Award-winning podcast The Worldshapers during its second year, and including several international bestsellers and winners of every major award in the field, as well as newer authors just beginning what promise to be stellar careers.

A woman seeking the power to see the evil hiding within others regrets receiving it. Letters written by a wizard in the past threaten a queen’s reign in the present. Competing for Earth, a human wrestler faces an alien shapeshifter in an interstellar tournament. A guide in Tibet must weigh the good of his people when asked to lead a westerner to the fabled realm of Shangri. An activist imprisoned for illegal genetic modification works with the materials at hand and the threads of the multiverse to make the world—a world, at least—a better place. A demonic agent sent to help a human turns the tables on his summoner.

Like the “cabinets of curiosities” created by collectors of the sixteenth century, Shapers of Worlds Volume II displays a varied array of thought-provoking delights: tales of humour and sorrow, darkness and light, and hope and despair that are full of adventure, full of life, and sometimes full of regret. There are stories set in alternate histories, in possible futures, near and far, and in the here-and-now, taking place on Earth, on distant planets, or in fantastic realms. All arise from the innate need of human beings to create, to imagine . . . to shape worlds.

Praise for Shapers of Worlds Volume I:

“One of the most wide-ranging volumes I’ve encountered in terms of sub-genre. It’s rather like a speculative fiction buffet, offering steampunk, fantasy, military fiction, magic, space opera, post-apocalyptic, hard science fiction, and others . . . Inventive and varied, the collection has a lot to offer for those seeking an interesting, entertaining, and thought-provoking read.” – Lisa Timpf, The Future Fire