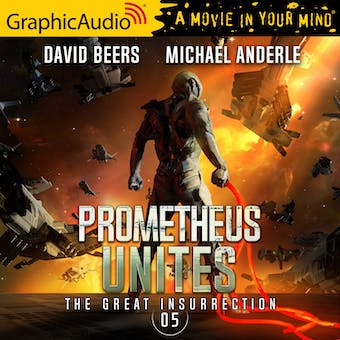 4,0 1 betyg
Serien Great Insurrection
5 h 36 min
"His reputation had grown… …and the fear it bred had one unintended consequence. Cristin de Monaham is a powerful and respected warlord. Her family and the planet of ice she rules are all that matters. When she hears about how Prometheus freed the slaves, she grows worried. Would he come for her next? On a barren world of freezing wind and snow, one doesn’t get second chances. It is better to kill and survive than risk diplomacy. Rather than wait on this conqueror, she’ll go to him—with her allies in tow, she’ll crush him. Alistair is struggling in his new role. Rebuilding a society is more than he bargained for and he’s forgotten his goal. Defeating the Commonwealth. Will he be ready for this new threat? Or is Prometheus’ fire about to be extinguished by an ice planet and its warlord? You’ll love this fifth audiobook in The Great Insurrection series, because not everything is black and white. Everyone has something to protect. Performed by Terence Aselford, Bradley Foster Smith, Marni Penning, Danny Gavigan, Lise Bruneau, Nanette Savard, Chris Stinson, Rob McFadyen, Zeke Alton, Colleen Delany, Joe Mallon, David Jourdan, Tony Nam, Chris Genebach, Peter Holdway, Amanda Forstrom, James Konicek, Christopher Williams, Scott McCormick, Ken Jackson, Christopher Walker, Alejandro Ruiz, Nora Achrati, Eric Messner, Daniel Llaca, Michael John Casey, Rose Elizabeth Supan, Mort Shelby, Eva Wilhelm, and Richard Rohan."