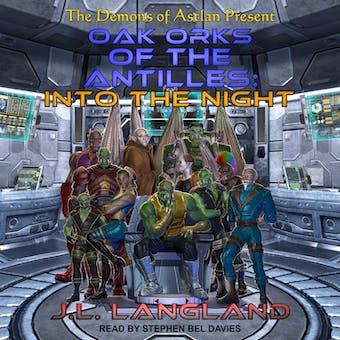 Oak Orks of the Antilles: Into the Night

Oak Orks of the Antilles: Into the Night

5,0 1 betyg
16 h 15 min
The current tour of duty for Leftenant Trig Bioblast, Second Shaman of the OCSS Skull Crusher, had been completely routine, and, disappointingly, uneventful. The days of revolution were a distant five hundred galactic years in the past.

Today, there was very little in the cluster that could significantly challenge an Oak Clan Star Ship, nor, admittedly any other clan cruiser in the horde. The last battle that had actually required the Skull Crusher to marshal her full might had been with a squid ship, nearly four GY ago, well before Trig had joined the ship.

While on duty, Trig had received an Automated Æthereal Message from the OCSS Bone Wracker: a Call-To-Arms, an extremely rare type of message that was only issued when a ship encountered a situation that was beyond the capabilities of a single OCSS.

Of course, the truly exciting news was that his superior, Thargus, was temporarily incapacitated, making Trig the acting First Shaman, giving him a front row seat to the investigation as part of the First Away Team. It appeared that, at long last, his on-duty life would get exciting enough to distract him from his off-duty life.

About two Galactic Weeks ago, a long dormant shaman stone passed down his family tree for thousands of years had suddenly become active, much to Trig's surprise. Upon examining the stone, he'd discovered that it was linked to another stone—in a different universe, beyond the Astral Plane. And the people who had activated the stone? Well, they were an ancient army of mythological immortal warriors that his grandfather claimed had once ruled a vast Multiversal Empire, but then vanished for no known reason.

A worthy adversary for their ship and a heated battle or two should serve to keep his mind off his mythological being problem.

Oak Orks of the Antilles: Into the Night är tillgänglig som ljudbok.