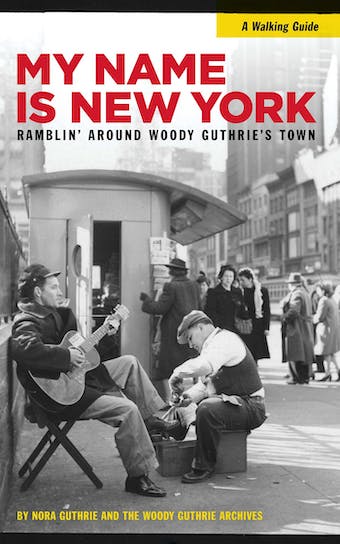 My Name is New York: Ramblin' Around Woody Guthrie's Town


My Name is New York: Ramblin' Around Woody Guthrie's Town

My name is New York, I'm a brick on a brick
I'm a hundred folks running, and ten dying sick
I'm a saint, I'm a sinner, a whore and her pimp
Your ocean's the mirror I look in to primp.
-"My Name Is New York," Woody Guthrie

Dust bowl troubadour Woody Guthrie first arrived in New York City on February 16, 1940. Although he continued to ramble, for 27 years- from 1940 until his death in 1967-New York was the city he called home and always returned to.

For the first time, this wonderful New York story comes to life with historical photos, documents, and previously unpublished lyrics from the Woody Guthrie Archives. Highlighting 19 significant locations, this little guide provides an expansive yet intimate portrait of Woody Guthrie's NYC life. We invite you to walk the streets, ride the buses and subways, or sit down and relax on some of the stoops, park benches, or beaches where Woody Guthrie did-always strumming away on his guitar, always working on a new song.

Many of Woody's most popular songs were written in apartments, lofts, and other locations around "New York Town." That song, along with "Jesus Christ," "Vigilante Man," "Hard Travelin'," "Tom Joad," "Reuben James," "All You Fascists Bound to Lose," and "1913 Massacre," are among the more than 600 he composed in the Big Apple. Most surprisingly, his iconic "This Land Is Your Land," was written at a small rooming house on 43rd Street and Sixth Avenue, on February 23, 1940 within a few days of his arrival. With new friends Pete Seeger, Lead Belly, Sonny Terry, and Brownie McGhee and the Almanac Singers he was at the center of a new movement-introducing and popularizing rural, roots, topical, and protest music to modern, urban audiences. For more information visit http://www.MyNameIsNY.com/