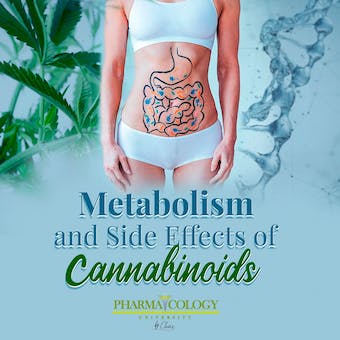 Metabolism and Side Effects of Cannabinoids

Metabolism and Side Effects of Cannabinoids

50 min
In the following audiobook you will learn about biochemistry, metabolism, pharmacokinetics and side effects of cannabinoids.

Cannabis is a plant species of the Cannabaceae family, which includes three strains: Cannabis indica, Cannabis sativa and Cannabis ruderalis. Thanks to its features, cannabis has been used in several fields throughout history. The first reference of its therapeutic use was in China, in the 4.000 B.C. in the most ancient pharmaceutical guide known: the Pen Ts’ao Ching, attributed to the emperor Shen Nung, where it was used against menstrual disorders, goute, malaria, constipation and muscular weakness; later, indications were extended to wound healing, against infectious processes, clearance of pus, treatment of rheumatism, and to decrease fever and anxiety.

Pharmacokinetics and metabolism of cannabinoids involve absorption through different routes of administration and drug prescriptions, distribution of their compounds throughout the body, metabolism by the liver and extrahepatic tissues, and elimination in feces, urine, sweat, oral fluids and hair, and excretion by different body fluids. Pharmacokinetic processes are dynamic, can change over time and can be affected by the frequency and magnitude of drug exposure.

There is limited understanding of the expected side effects of cannabis use in a therapeutic context. Consequently, a significant amount of the data on this topic are derived from studies investigating the recreational use of cannabis, which implies caution in making conclusions regarding medicinal use. Specifically, the amount of cannabis used, methods of administration, and the existence of comorbidities differ significantly between recreational and medicinal cannabis-using populations. As a result, different side effects might be expected, but what has been documented to date refers to mild effects.

Metabolism and Side Effects of Cannabinoids är tillgänglig som ljudbok.