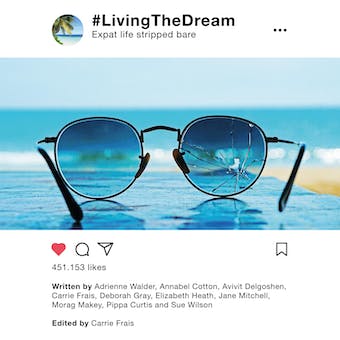 3 h 19 min
Grief, loneliness, Brexit, motherhood, identity, single parenthood, rootlessness, drinking culture and integration are just some of the issues tackled in a series of powerful stories written by ten women on the challenges of expat life in Spain, France, Hong Kong, Australia, Israel, Belgium, New Zealand and the UK.

In one of the first books of its kind, these women reveal some of the emotional upheavals and struggles that go hand-in-hand with moving away from their native ‘home’, but until now have remained largely untold.

"The life of an expat is often coveted. We are sometimes viewed as courageous, uprooting ourselves from the security blanket of having one’s extended family nearby to face new adventures and experiences. #LivingTheDream. Expat life can also be terrifying, emotional, confusing and challenging. We are often targeted with a specific type of ‘positivity’ when people tell us how ‘lucky’ we are. So, when we experience anxiety, stress, insomnia, even depression caused by the likes of culture shock, loneliness, rootlessness, social exclusion and bureaucracy, we sometimes feel that we should not complain. These ten female writers reveal some of the emotional upheavals and struggles that go hand-in-hand with moving away from their native ‘home’, but until now have remained largely untold. #LivingTheDream exposes the reality behind the ‘veneer’ of those ‘idyllic’ instagram posts.”