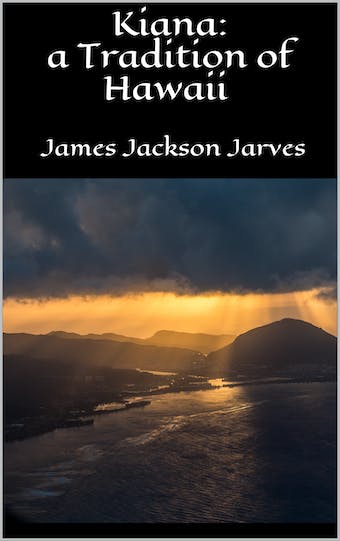 Kiana: a Tradition of Hawaii

Kiana: a Tradition of Hawaii

Strictly speaking, there is no such thing as Fiction. Every emotion, thought, or action embodied into literature has been human experience at some time. We can imagine nothing within the laws of nature, but what has had or may have an actual existence. A novel, therefore, but personifies the Truth. In giving a local interest to its actors, it introduces them to the reader through the medium of sympathies and passions, common to his own heart, of reason intelligible to his own mind, or of moral sentiments that find an echo in his own soul. Its success depends upon the skill and feeling with which the author works out his characters into a consistent whole-creating a simple and effective unity out of his plot, locality, and motive. Still every reader likes to feel that the persons whose fates warm his interest in the pages of a romance, actually lived and were as tangibly human as himself, and his degree of interest is apt to be in ratio to his belief that they were real personages. I am glad, therefore, to be able to assure my readers of the following facts.

In my youth I spent several years in different parts of the Pacific Ocean, but chiefly at the Sandwich or Hawaiian Islands. While engaged in procuring materials for their history,-first published in 1843,-I was much struck with a tradition relating to their history by Europeans, two and a half centuries before Cook so accidentally stumbled upon them. Briefly it was this:

Eighteen generations of kings previous to Kamehameha I., during the reign of Kahoukapa, or Kiana, there arrived at Hawaii, a white priest, bringing with him an idol, which, by his persuasion, was enrolled in the calendar of the Hawaiian gods, and a temple erected for its service. The stranger priest acquired great influence, and left a reputation for goodness that was green in the memories of the people of Hawaii three centuries later. Another statement adds that a vessel was wrecked on the island, and the captain and his sister reached the shore, where they were kindly received and adopted into the families of the chiefs.