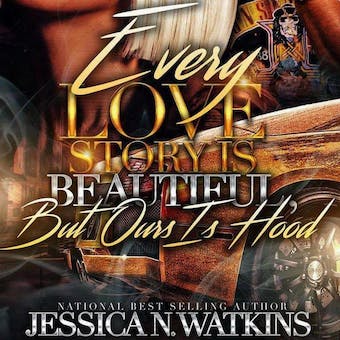 Every Love Story Is Beautiful, But Ours Is Hood

Every Love Story Is Beautiful, But Ours Is Hood

7 h 43 min
From birth, the Savage brothers were taught by their father, Deuce, that life is like a sandwich; any way you flip it, the bread comes first. They were taught to get money, not fall in love, so they left a wreckage of broken hearts on their road to getting money. Yet, now, as mature men, they realize that you’re not rich until you have something that money can’t buy. And money certainly cannot buy the women that have stolen these brothers’ hard and stubborn hearts.

Taye “City” Savage and Akira White’s love story started in the projects. Ten years ago, they met when Akira was only a young girl and City was a grown man getting his hustle started. City and Akira’s bond was strong, and their fate was inevitable, so they thought. However, before their bound could be sealed, life happened. They were torn apart by unimaginable circumstances, and they never saw one another again until a decade later. Yet, by that time, both City and Akira were involved, but they weren’t so loyal to Nova and Davion that they could ignore the passion in their hearts that they still harbored for one another.

Sometimes, the last thing a person wants to do is fall in love, but love sucks them in any way. That is exactly what happens with these Savage brothers and the women that adore them. As life always has it, love ain’t that easy to obtain, especially when loving a man that was raised by the streets and whose first love is the hustle. In yet another urban tale by Jessica N. Watkins, death, sex, and chaos leads to unforeseen tragedy and unexpected love.

Every Love Story Is Beautiful, But Ours Is Hood är tillgänglig som ljudbok.