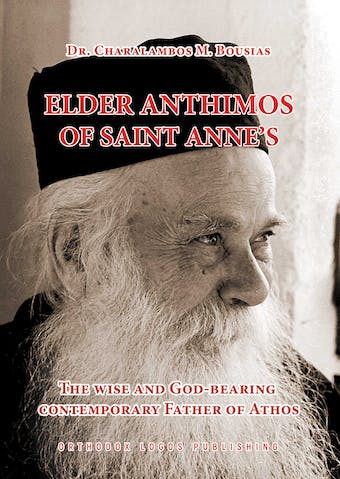 It is with great pleasure that we announce the publication of the long-awaited English language edition of ELDER ANTHIMOS OF ST. ANNE’S, the wise and God-bearing Contemporary Father of Athos, by Dr. Charalambos M. Bousias. It was translated from the sixth Greek edition of 2004, and contains material not included in the Greek edition. Although the name of the Athonite Elder Anthimos (1913-1996) has not yet been added to the Church’s calendar of saints, many of those who knew him have testified to the holiness of his life, and his strictness, or exactitude, in matters of the Orthodox Faith.

This wise ascetic of Mount Athos has shone forth in our times “like a star shedding a new light of piety, and as a brightly shining vessel of grace.” People were drawn to this humble monk because of his wise spiritual counsels, and by the holiness of his life. Reading the life of Elder Anthimos, we discover that he was indeed a holy ascetic who strove to purify himself of every sinful inclination, and to acquire every virtue. After years of struggle, he became an unerring guide of souls, a Spiritual Father to those at St Anne’s, and in other monasteries on the Holy Mountain. He also had many other spiritual children in Greece, and in other countries.

The Greek life of Elder Anthimos has already appeared in several editions. It has also been translated from Greek into Russian, and now, by the grace of God, it is available in English. The lives and teachings of righteous men and women can be a salutary antidote to the turbulent storm of modern existence, revealing the way of holiness to people in every land, and in every walk of life. It is hoped that those who read this book will be edified by his God-pleasing life, and encouraged by his words. New to this volume are some of the liturgical services in honor of Elder Anthimos, composed by Dr. Bousias, who is also a noted hymnographer. The service of Great Vespers, the Supplicatory Canon, and Matins were originally printed in a separate booklet.

Now, the biographical and liturgical materials are conveniently gathered together in a single volume, which contains several photographs, many of them in color. A special Introduction to the English edition places Elder Anthimos within the context of Orthodox Tradition, and the spiritual history of Mount Athos. The influence of Elder Anthimos is not limited to St Anne’s Skete, or to Mount Athos, for his life and teachings have great significance for the whole world. A Glossary has also been added, providing useful definitions of Orthodox terms for those who may not be familiar with them.