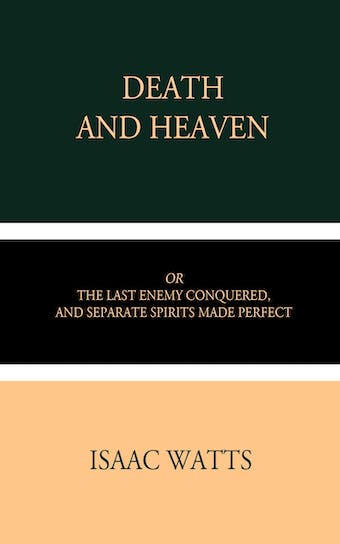 HERE is communicated to you a treatise, in which the late pious Mr. Frank, professor of divinity at Halle, found so much edification and satisfaction that he engaged an able person to translate it into our German tongue, to make others partake of the same spiritual benefit. This treatise consists of two funeral sermons, which an English divine, who perhaps is still living, composed on the death of two eminent persons, which he enlarged afterwards for their publication. The subject of the first is death, taken from 1 Cor. 15:26. The second is heaven, from Heb. 12:22. From this last he takes an occasion of flying with his thoughts into the blessed mansions of the just made perfect, by giving us not only a very probable and beautiful idea of the glory of a future life in general, but also an enumeration of the many sorts of employments and pleasures, that are to be met with there.

After the several false notions, people of different complexions have of eternal life, are laid open, the author of the preface goes on and quotes some German authors, who have writ upon that subject, and says at last: I hope nobody will presume to aver this doctrine to have been so far exhaused by those authors, that nothing new could be said upon it. For several learned writers in England, who in meditating and searching after hidden truths, have shewn an extraordinary capacity, prove the contrary; and amongst others there is the treatise, called, The future State, published 1683, by a gentleman whose name is concealed, which appeared in French 1700, and is now printed in German with a preface of the famous Dr. Pritius, senior, at Frankfurt ad Mænum. There is among Sir R. Blackmore’s Essays, one upon the future beatitudes. The traces of these two English gentlemen are followed by our present English divine I. WATTS, who however, in many points has outdone these predecessors, and advanced a step farther in his contemplations.

Though the first sermon contains many elegant passages worthy to be read, yet the latter seems to be a more elaborate piece, because it sets the doctrine of eternal life in a greater light, and enriches it with many probable inferences drawn from the word of God. He proposes his excellent thoughts in most emphatical terms, in that beautiful order and with such a vivacity of style that he keeps the reader in a continual attention, and an eager desire to read on. It is plain the author’s mind was so taken up with the beauty of heaven, that his mouth could not but speak from the abundance of his heart. There is a secret unction in his expressions, which leaves a sweet savour in the reader’s heart, and raises in him a desire after the blessed society he speaks of. And though the reader should not entirely agree with the author’s notions, yet he will not peruse this treatise without a particular edification and blessing. I cannot deny but the author’s conjectures may be sometimes carried a little too far, but that doth not prejudice the subject in the least. Besides, he is generally so happy as to find some arguments for his probable notions in the word of God, and to answer very dexterously all the objections that can be made against him.

May the ever-living God give a blessing to this work, and grant that these sweet and relishing truths proposed in these leaves may make such an impression upon the minds of the readers as those noble truths deserve. May be prevent all the abuse of this delightful subject, and never permit it to be turned into a mere dry or fruitless speculation; but may he inflame every reader with a holy desire after a blessed eternity, and rouze and excite all those, that have not begun yet to tread the path of salvation, to enter into the same without delay, that they may not rest in a mere delightful prospect of the land of Canaan, nor be for ever excluded by their unbelief from the eternal enjoyment of it.