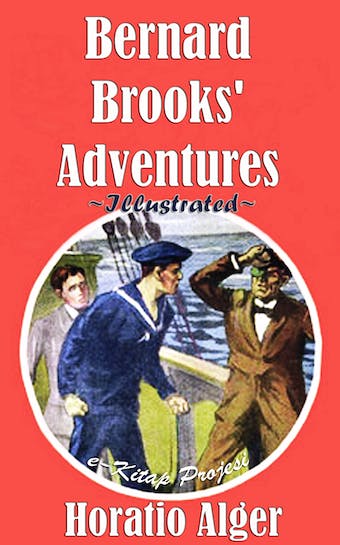 You're a bad lot, Bernard Brooks. I don't think I ever knew a wuss boy."

"Thank you for the compliment, Mr. Snowdon. Let me suggest, however, that wuss is hardly correct English."

The speaker was fifteen years of age, but as tall as most boys of seventeen. He had a bold, aggressive manner, which he only assumed with those he thought were hostile or unfriendly.

He could be a devoted friend, and a loyal subordinate to one who gained his good will. Mr. Snowdon he did not look upon as a friend, though he had been placed in his charge two months before by a cousin of his deceased father.

Ezekiel Snowdon, a man of perhaps sixty, tall and with stooping shoulders, colored with anger at the boy's sarcastic words.

He claimed to have been educated at a small Wes-tern college, and on the strength of it had established himself in the country and advertised for private pupils at a low rate.

These were mostly young, and not competent to see his deficiencies, but Bernard was old enough and well enough educated to perceive and comment on them. This greatly annoyed Mr. Snowdon, who felt that the boy did not treat him with proper respect.

"Quit your impudence!" said Snowdon with a vicious look in his greenish lived eyes. "I don't need no criticisms from a whipper snapper like you."

"I intended it for your benefit, Mr. Snowdon," said Bernard demurely. "Besides, you criticise me. You called me a bad lot."

"And so you are. A wuss—a worse boy I never seen."

"Saw would be more correct, Mr. Snowdon."
"Young man, you'd better look out. I won't submit to your aggravating impudence. Besides, you are ignorant of the fact that Chaucer and Spenser use seen for saw. Them are my favorite poets, so it is not strange that I should occasionally make use of their diction."

"Thank you for the information, Mr. Snowdon. I did not know that you had such high authority. I have read a little of Chaucer and Spenser, and I never observed the word you mention."

"Perhaps you have not read the same works as I," said Mr. Snowdon.