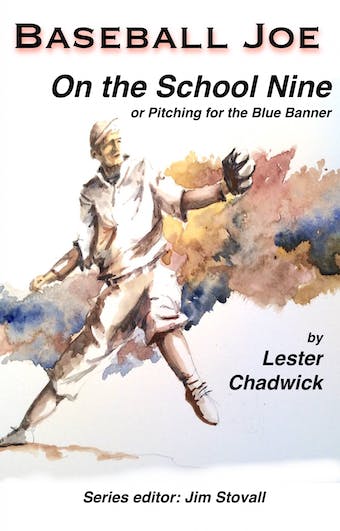 Baseball Joe on the School Nine

Baseball Joe on the School Nine

.Just pluck, wit, forging relationships, setting goals, overcoming whatever gets in your way.

Joe Matson is just an ordinary kid in a typical Midwestern town. He loves to play baseball and wants to make it onto the local nine, but his every step finds obstacles in the way. Joe wants to pitch, but the team has a star pitcher already who is reluctant – to say the least – to give up his position to this fresh-faced newcomer. But Joe perseveres, occasionally getting a lucky break, but more often having to rely on his own resources to reach his goal.

As he reaches one goal, he then tackles the next one – making it to Yale and playing for the college team, then becoming a professional, later getting into the big leagues, and finally making it to the top of the baseball world.It is what they used to call “pluck.”Joe has plenty of that as he gradually becomes Baseball Joe. In this volume, Baseball Joe on the School Nine, our hero gets into prep school and tries out for the baseball team. Making the team isn’t easy, however. Joe must overcome many obstacles, but Joe knows what he wants and seizes the opportunities when they present themselves.

You can follow Baseball Joe’s progress as he ascends the heights of his baseball glory with exciting and surprising adventures along the way. First Inning Press is proud to introduce these new editions of Baseball Joe’s exploits in a ten-volume set. Once you read one of them, you will want to read them all.

For the boy in your life – maybe that boy is you – these are the perfect companions – simple tales that are accessible and easy-to-read. Give the gift of reading to the person you care about today.

The genius behind the Baseball Joe books was Edward Stratemeyer (1862-1930), a New Jersey born writer who was creative and prolific. As a teenager, Stratemeyer has his own printing press and understood the printing and distribution process intimately. He began writing stories then but didn’t sell his first story to a magazine until he was 26. In 1899, Stratemeyer published the first of his Rover Boys series, which became widely popular. Stratemeyer did not invent the series formula, but he recognized its potential, and in 1905, he formed the Stratemeyer Literary Syndicate through which he hired journalists to write stories based on his ideas and outlines. He would pay his writers a flat fee and keep the copyright for himself. Thus was born series such as The Hardy Boys, Tom Swift, and Nancy Drew. Baseball Joe never reached the cultural status as these other series, possibly because of their specialized setting – the world of baseball – but they are nevertheless a pleasant and entertaining set that will continue to delight young readers.

Stratemeyer lived a quiet life with this family in New Jersey and never sought publicity for himself. He also made a ton of money. After his death, Stratemeyer’s work continued, and his legacy entertained millions of young readers even into the twenty-first century.

We hope that legacy will continue well into this century.First Inning Press has done very little editing to the text, believing they should be preserved as they were a century ago. We have added illustrations, however, that we hope will enhance the reading experience of all, young and old, who open these pages.