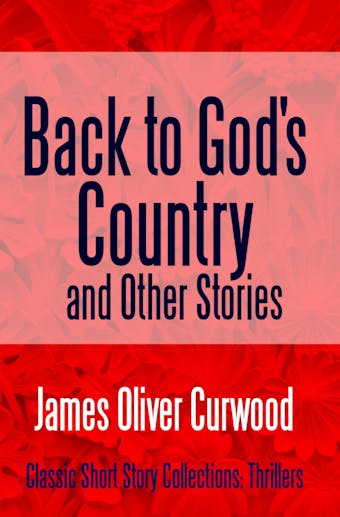 Back to God's Country and Other Stories

Back to God's Country and Other Stories

Back to God's Country opens on an idyllic note at the peaceful Canadian mountain home where the innocent child-of-nature Dolores LeBeau lives with her doting father Baptiste LeBeau and a legion of animal friends. When a handsome naturalist Peter Burke stops in at their mountain paradise he is charmed by Dolores and the pair are soon announcing their engagement to Baptiste. But the always changeable mood of Back to God's Country suddenly shifts from a bucolic love story to a genuine nightmare. A murderous criminal Rydal hiding out in the mountains and traveling with his half-breed sidekick, spies Dolores skinny-dipping in a brook and vows to "have" her.

Back to God's Country was based on a typically sensational James Oliver Curwood short story "Wapi, the Walrus." Curwood was known for a bizarre fiction formula in which decent women were threatened with rape, only to be rescued from a fate worse than death by a protective dog. Curwood's prototypical woman-beast storyline was also used in Back to God's Country, with Dolores finding an abused, vicious black dog Wapi, her only companion and helpmate in the barren winter landscape where she and Peter are trapped. Dolores and Wapi form a bond that transforms this fascinating, strange story yet again, from a tale of human evil, to an oddly touching story of the loving relationship between a woman and a dog.

BACK TO
GOD'S COUNTRY (Excerpt)

When Shan Tung, the long-cued Chinaman from
Vancouver, started up the Frazer River in the old days when the
Telegraph Trail and the headwaters of the Peace were the Meccas of

half the gold-hunting population of British Columbia, he did not
foresee tragedy ahead of him. He was a clever man, was Shan Tung, a

cha-sukeed, a very devil in the collecting of gold, and far-seeing.
But he could not look forty years into the future, and when Shan Tung

set off into the north, that winter, he was in reality touching fire
to the end of a fuse that was to burn through four decades before the

With Shan Tung went Tao, a Great Dane. The
Chinaman had picked him up somewhere on the coast and had trained him

as one trains a horse. Tao was the biggest dog ever seen about the
Height of Land, the most powerful, and at times the most terrible. Of

two things Shan Tung was enormously proud in his silent and
mysterious oriental way—of Tao, the dog, and of his long, shining

cue which fell to the crook of his knees when he let it down. It had
been the longest cue in Vancouver, and therefore it was the longest

cue in British Columbia. The cue and the dog formed the combination
which set the forty-year fuse of romance and tragedy burning. Shan

Tung started for the El Dorados early in the winter, and Tao alone
pulled his sledge and outfit. It was no more than an ordinary task

for the monstrous Great Dane, and Shan Tung subserviently but with
hidden triumph passed outfit after outfit exhausted by the way. He

had reached Copper Creek Camp, which was boiling and frothing with
the excitement of gold-maddened men, and was congratulating himself

that he would soon be at the camps west of the Peace, when the thing
happened. A drunken Irishman, filled with a grim and unfortunate

sense of humor, spotted Shan Tung's wonderful cue and coveted it.
Wherefore there followed a bit of excitement in which Shan Tung
passed into his empyrean home with a bullet through his heart, and

the drunken Irishman was strung up for his misdeed fifteen minutes
later. Tao, the Great Dane, was taken by the leader of the men who

pulled on the rope. Tao's new master was a "drifter," and
as he drifted, his face was always set to the north, until at last a

new humor struck him and he turned eastward to the Mackenzie. As the
seasons passed, Tao found mates along the way and left a string of

his progeny behind him, and he had new masters, one after another,
until he was grown old and his muzzle was turning gray. And never did

one of these masters turn south with him. Always it was north, north
with the white man first, north with the Cree, and then wit h the

Chippewayan, until in the end the dog born in a Vancouver kennel died
in an Eskimo igloo on the Great Bear. But the breed of the Great Dane

lived on. Here and there, as the years passed, one would find among
the Eskimo trace-dogs, a grizzled-haired, powerful-jawed giant that

was alien to the arctic stock, and in these occasional aliens ran the
blood of Tao, the Dane.

Forty years, more or less, after Shan Tung lost
his life and his cue at Copper Creek Camp, there was born on a firth

of Coronation Gulf a dog who was named Wapi, which means "the
Walrus."...

number of his works were turned into movies, several of which starred
Nell Shipman as a brave and adventurous woman in the wilds of the

north. Many films from Curwood's writings were made during his
lifetime, as well as after his passing through to the 1950s. In 1988

interest in Curwood's stories that resulted in five more films being
produced in 1994 and 1995.

Back to God's Country and Other Stories är tillgänglig som e-bok.