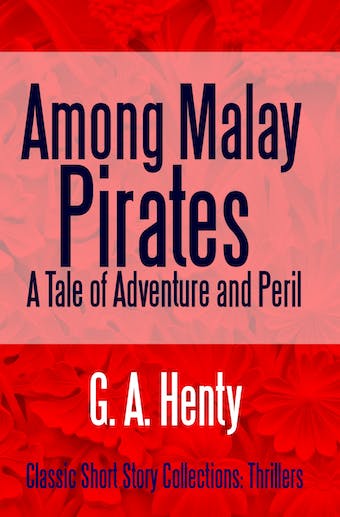 Serien Classic Short Story Collections: Thrillers Del 1
In this collection of shorter stories we visit Malay pirates, have a couple of tales of India, a shipwreck off the Channel Islands and a bursting dam in California, and finish off escaping from captivity in China.

"I wish most heartily that something would
happen," Harry Parkhurst, a midshipman of some sixteen years of
age, said to his chum, Dick Balderson, as they leaned on the rail of

her majesty's gunboat Serpent, and looked gloomily at the turbid
stream that rolled past the ship as she lay at anchor.

"One day is just like another—one is in a
state of perspiration from morning till night, and from night till

morning. There seems to be always a mist upon the water; and if it
were not that we get up steam every three or four days and run out

for twenty-four hours for a breath of fresh air, I believe that we
should be all eaten up with fever in no time. Of course, they are

always talking of Malay pirates up the river kicking up a row; but it
never seems to come off."

"There is one thing, Harry—there is always
something to look at, for there are canoes constantly going up and

down, and there is plenty of variety among them—from the sluggish
dhows, laden with up country produce, to the long canoes with a score

of paddlers and some picturesque ruffian sitting in the stern. It
adds to the interest when you know that the crews are cutthroats to a

man, and would make but the shortest possible work of you if they had
got you in their power."

"Yes, Dick. Look at that canoe coming up
stream; what a good looking chap that is in the stern, though by the

way he scowls at us I can quite believe he would, as you say, cut our
throats if he had the chance. That is a pretty little child sitting

by him, and what a gorgeous dress she has! There, you see, he can
look pleasant enough when he speaks to her. I fancy they must have

come from a long way up the river, for they look wilder than most of
the fellows who pass us. If that fool who is steering her does not

mind what he is about, Dick, he will either run into that canoe
coming down or else get across our chain. There, I told you so."

The man at the tiller was in fact, looking, with
mingled curiosity and hostility, at the gunboat that he was passing

but a few yards away, and did not notice a canoe, manned by six
rowers, that was coming down with the stream, taking an oblique
course across the bows of the Serpent, and was indeed hidden from his

view by the hull of the vessel, until he had passed beyond her. Then
there was a sudden shout and a yell from a dozen throats, as the two

canoes came into collision, the one proceeding up the river being
struck on the quarter with a force that almost cut her in two, and in

an instant her occupants were in the water. As the Malays were to a
man almost as much at home in the water as on land, the accident

would have had little effect beyond the loss of the boat and its
contents, had it not been that the stern of the other craft struck

the Malay chief with such force as to completely disable him, and he
would have sunk at once had not two of the boatmen grasped him and

kept his head above water...